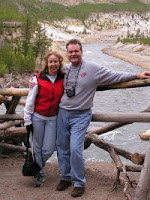 I found out this afternoon that the husband of one of my dearest friends was killed in an auto crash in Birmingham, Alabama Tuesday. Apparently a pick-up truck crossed the median and hit their car head-on; Stan was driving and died despite wearing a seat belt. Angi was hospitalized, either injured or critically injured, depending upon which story you read. At least this International Business Times article lists what hospital she is in. I had left a bunch of emails and phone messages down to mutual friends and former colleagues in Atlanta earlier this afternoon but (probably due to the holiday) hadn't heard back from anyone yet.

Angi is just about the kindest soul you could meet (whip-smart too, with a keen sense of humor) and Stan was undoubtedly her soulmate. They didn't meet until mid-life and I was so happy for both of them that they found each other. They both were very family-oriented, were huge news junkies and loved to travel. Every year Angi would send a holiday card with a picture of the two of them - usually smiling ear-to-ear, like this picture - from some interesting place they visited and enjoyed... almost as much as they enjoyed just being with each other.

My heart is heavy. I - along with many others I'm sure - will call, send cards, make donations, and do any of a million other things that people try to do for each other when someone is grieving. We all know it all falls short - nothing is going to bring Stan back - but we do it just the same because there is nothing else to do. So if you would, please include Angi, Stan and their families in your prayers tonight too. Thanks.
Posted by A at 10:05 PM