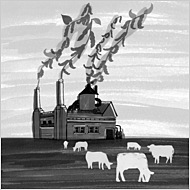 IS eating a hamburger the global warming equivalent of driving a Hummer? This week an article in The Times of London carried a headline that blared: “Give Up Meat to Save the Planet.” Former Vice President Al Gore, who has made climate change his signature issue, has even been assailed for omnivorous eating by animal rights activists.

It’s true that food production is an important contributor to climate change. And the claim that meat (especially beef) is closely linked to global warming has received some credible backing, including by the United Nations and University of Chicago. Both institutions have issued reports that have been widely summarized as condemning meat-eating.

However, as the author argues, "that’s an overly simplistic conclusion to draw from the research." Read the rest of Ms. Niman's thought-provoking counterpoint here...

Does Ohio's "Issue 2" cover puppy mills or no?

Big controversy in the Buckeye State over whether a pending referendum dealing with farm animal welfare covers dog breeding operations too. Read more in this Akron Beacon Journal article....

Pet owners who violate relatively minor animal-related laws in unincorporated San Diego County or in Department of Animal Services contract cities will soon be able to attend the pet owner version of traffic school rather than be assessed the full fine amount.

Bob Barker, the longtime "The Price is Right" host who made headlines several years ago when he began giving away $1 million gifts to law schools to teach animal law, is at it again. This time, he's giving a million dollars to his alma mater to establish a professorship in animal law - with the hopes that Missouri's Drury University will eventually establish a full undergraduate degree program.

Just a quick bit of self-promotion here... This month, GP Solo (the ABA's General Practice, Solo & Small Firm Division magazine) published my letter to the editor. The letter comments on the AVMA's rather unabashed propaganda piece in the summer issue of the magazine, which focused on Animal Law. That issue is available through the ABA website. Click here. (Not sure if you have to be a member to view it.)

The new issue is not available on the web yet. But since I'm the author (and heaven knows I'm always scraping around for blog content anyway), here it is:

Thank you very much for devoting an entire issue to “Animal Law” [July/August 2009, vol. 26, no. 5]. As an animal law practitioner, it was terrific to see this topic get the attention it so increasingly deserves!

Unfortunately, the article on “Non-Economic Damages in Pet Lawsuits” amounted to little more than an unrebutted forum for the American Veterinary Medical Association to advance its own agenda. I would like to take this opportunity to offer a counterpoint.

The AVMA begins by acknowledging that many people think of their animals as more than property but then warns that permitting non-economic damages for their negligent harm would cause veterinary insurance premiums to rise, rabies to become prevalent, animals to be abandoned, prices to increase on everything from pet supplies to auto insurance, and police officers to be hesitant to shoot rabid animals.

The authors, however, offer no data to support any of these dire predictions. In fact, the veterinary insurance industry’s own data suggests that permitting non-economic damages would translate to an increased cost of only about 13 cents per owner, and even if premiums “truly skyrocketed by 100 times their current level,” this would still only translate to a “cost increase of $11.50 per pet-owning household” (C. Green, “The Future of Veterinary Malpractice Liability in the Care of Companion Animals,” Animal Law, vol. 10, 2004, pp. 163, 218, 219).

If fears of spiraling costs are unfounded, perhaps other concerns have also been greatly exaggerated. For example, allowing non-economic damages will not “impose” an adversarial relationship between vets and clients. Animal owners will not be required to sue their vets, and those that do are likely already in an adversarial relationship. Police officers’ conduct is also unlikely to be affected, as anyone even arguably acting under color of law will not have to pay a judgment out of his or her own pocket.

The AVMA likewise mixes apples and oranges by arguing that permitting non-economic damages will elevate human-animal relationships above some human-human relationships. A claim for “negligent infliction of emotional distress” is narrower and protects fewer relationships than a claim for emotional loss as a component of compensatory damages. As a result, seeking damages for the injury or death of a beloved companion is not a referendum on which type of relationship is more valuable.

The AVMA’s attempts to counter some frequently cited reasons for permitting non-economic damages wither under scrutiny. The suggestion that criminal cruelty statutes already serve the purpose of recognizing the value that owners place on their animals fails to mention that such statutes routinely exempt veterinary practices. The suggestion that any need to deter veterinary negligence is already served by veterinary medical boards fails to acknowledge that these boards do not offer the remedies afforded by a private right of action. And the AVMA’s attempt to dismiss the entire issue of non-economic damages by suggesting that “only a small number of animal rights activists and attorneys are pushing this issue” ignores their own statistics: 60 percent of U.S. households have companion animals. If even 1 percent believe their companions to be worth more than an economic analysis, that’s still roughly 3 million people.

Veterinarians (and other animal-related product/service providers) earn their entire livelihood based upon the reality that owners are willing to spend more to care for their animals than it costs to simply replace them if they become ill or injured (Steven M. Wise, “Recovery of Common Law Damages for Emotional Distress, Loss of Society, and Loss of Companionship for the Wrongful Death of a Companion Animal,” Animal Law, vol. 4, 1998, pp. 33, 47). And yet, the AVMA is the first to argue that any recovery should be limited to economic measures only. Such arguments are increasingly indefensible. The law has evolved to recognize reality and reject such arguments in other areas. It should do the same here.

Is McCotter Barking Up the Right Tree with Tax Deductions for Pet Owners?

A Missouri congressman is sponsoring a bill "Humanity and Pets Partnered Through the Years" (”HAPPY Act”) that would allow taxpayers to deduct up to $3,500 a year in pet care expenses. (No kidding!)

Read more in Taxgirl's recent blog post.
Posted by A at 9:05 AM No comments:

By DEBRA LANDIS
THE STATE JOURNAL-REGISTER
ROCHESTER -- The Rochester Buckhart Action Group has appealed a ruling that hog farmer Robert Young is entitled to damages due to a lawsuit the group filed in an unsuccessful attempt to block construction of his facility.

Upon information and belief, the following post recently appeared on a blog called "The Meatingplace" at www.meatingplace.com:

Animal Agriculture Alliance recently sent out a press release expressing their concern over the fact that the undercover activists that participate in animal abuse rather than immediately reporting it to management are not held accountable. They certainly do have a point!

To quote their release "As these videos achieve the publicity sought by the groups, the Alliance is concerned that the activist employees providing the tapes are not held accountable for their failure to follow company animal care policies and their failure to immediately report mistreatment to the farm owners or managers."

In the past, I have supported video cameras in the live handling areas of poultry processing plants to document handling. If there is a long history of proper animal handling a single incident reported by an activist group could be easily rebutted. There are egg companies doing just this and even using a third party to archive and evaluate the videos, thus removing any hint of tampering. I don't think that is necessary although, it has merit. I do think you could simply use time stamped video as proof.

With digital media and the abundance of camera types and prices available today, cost is not a big factor. As for the discomfort of people working in the area, it is for their protection. In addition, we have all become accustomed to seeing signs at the bank, the convenience store and shopping malls telling us that we are being taped. Big brother has been here for quite a while now. Let's use this technology to our advantage and eliminate the advantage of the activists.

Please note that you need to be a member of the blog in order to sign in and actually read the posts, so I can't independently confirm either the post or the authenticity of the contents. Just passing it along at face value...
Posted by A at 9:01 AM No comments:

Governor Schwarzenegger has signed a bill making California the first state in the nation to ban the practice of docking cows' tails. This despite the fact he initially ridiculed lawmakers for spending time considering the measure. Read the rest in USA Today.

The governor's progressive stance, however, comes on the same he also vetoed legislation to crack down on large-scale puppy mills, making him - according to USA Today - the only governor in six states that passed such legislation to override it with a veto.

Meantime, Michigan's governor signed legislation yesterday making "Michigan the second state to ban so-called battery cages for egg-laying chickens, the fifth to ban veal crates and the seventh to ban stalls for pregnant pigs." Read more in this little blog article. There's more info available in Michigan's Agriculture Industry Today, but it looks like you have to be a member to access it.
Posted by A at 12:02 PM No comments:

Congrats to Denver's Animal Law Center for a great ruling Friday on behalf of Dexter, the not-so-much-a-pit-bull! Click for a video link to a KDVR-TV story!
Posted by A at 7:29 PM No comments:

Meanwhile, a Florida appellate court has given a vet malpractice suit a second chance at trying to budge Florida's prohibition on emotional damages for loss of a companion animal. Read more in this Herald Tribune article by Todd Ruger.
Posted by A at 7:19 PM No comments:

Is it me or is this a really, really bad idea???

What's next? A balloon ride to celebrate the anniversary of the Hindenberg?

No reason to stop there... this could be a whole cottage industry... "disaster tourism"! Can't you just see the advertising now? "Lose weight AND re-live history: enjoy a recreation of the Irish potato famine!" Or who could resist this travel gem: "Freeze your own moment in time with Pompei II! And for those seeking that once-in-a-lifetime vacation: "Local renaissance faire not enough of a medieval experience? Discover Bubonic Plague Paradise!"

Reporting from Washington - Could the government outlaw a hypothetical "Human Sacrifice Channel" on cable TV?

That question became the focus of a Supreme Court argument Tuesday on the reach of the 1st Amendment and whether Congress can outlaw videos showing dogs fighting or other small animals being tortured and killed.

Click here for the rest of the article...
Posted by A at 8:54 PM No comments:

Exploring the Health Benefits of Pets 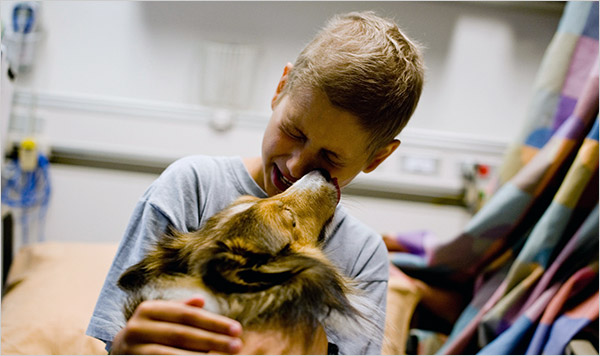 When Chad, a yellow Labrador retriever, moved in with Claire Vaccaro’s family in Manhattan last spring, he already had an important role. As an autism service dog, he was joining the family to help protect Ms. Vaccaro’s 11-year-old son, Milo — especially in public, where he often had tantrums or tried to run away.

Like many companion animals, whether service dogs or pets, Chad had an immediate effect — the kind of effect that is noticeable but has yet to be fully understood through scientific study. And it went beyond the tether that connects dog and boy in public.