Thanks to Richard Bruce Rosenthal and Joan Schaffner for the heads-up on this disappointing decision...
Posted by A at 3:24 PM No comments:

The movement by U.S. food corporations toward more humane treatment of animals experienced a whopper of a shift Wednesday when Burger King announced that all of its eggs and pork will come from cage-free chickens and pigs by 2017.

Read more in the Christian Science Monitor...
Posted by A at 10:38 AM No comments:

A huge thanks to my friend Ira for the heads-up on this one!  Here's the article from law.com:

In a precedent-setting case, a Colorado judge awarded a Denver woman $65,000 for the death of her 18-month old dog Ruthie, who was struck by a car after a cleaning service accidentally let her out.

Jenna Greene
April 20, 2012
Any pet lover will tell you that dogs are more than just property. Now, courts are starting to see it that way too.

In a precedent-setting case, a Colorado judge awarded a Denver woman $65,000 for the death of her 18-month old dog Ruthie, who was struck by a car after a cleaning service accidentally let her out. The cleaners left the dying dog under the dining room table.

The dog's owner, Robin Lohre, sued the company, Posh Maids, in Denver County District Court, alleging negligence and emotional distress. She said she specifically told the cleaners not to let Ruthie out, and to use the back door so the dog couldn't escape.

After Ruthie was hit by the car, Lohre said the cleaners did not contact her or seek emergency veterinary care. They claimed that at the time they left, the dog was alive and "whimpering a little."

Courts have typically viewed pets like furniture — they're worth their replacement value, which the case of Ruthie, a mixed breed, would have been negligible.

Last month, Judge Eric Elliff awarded Lohre $65,000, which Lohre's attorneys believe is the most for the death of a pet in state history.

"The ruling sets a damages precedent that animals are worth more than their replacement value," said Jennifer Edwards, the founder of The Animal Law Center, who represented Lohre. "When we lose a pet, we do suffer emotional distress and heartache, just as we would with any other member of our families."

Edwards said she presented evidence of damages including therapy bills for Lohre and her daughter and lost business income. "My client was extraordinarily devastated by the loss of Ruthie," she said, adding that she hopes the decision will change the way courts value pets. "The court system needs to get more in line with the way people feel about their animals," she said.

The ruling comes on the heels of a Texas case, when Fort Worth's 2nd Court of Appeals in November reinterpreted a 120-year-old precedent from the Texas Supreme Court that plaintiffs could recover only an animal's market value.

"Dogs are unconditionally devoted to their owners," the three judge panel found. "Today, we interpret timeworn supreme court law in light of subsequent supreme court law to acknowledge that the special value of man's best friend should be protected."

The case, Medlen v. Stickland, began in 2009 when the Medlen's dog, Avery, escaped and was picked up by animal control. Jeremy Medlen went to the shelter to get the dog, but did not have enough money to pay the fee.

He was told he could come back in a few days, and that a "hold for owner" tag would be placed on Avery's cage, notifying employees that the dog was not to be euthanized. Despite the tag, shelter employee Carla Stickland put the dog on the list to be put down, and Avery was killed the following day.

The Medlens sued for negligence, seeking damages for Avery's sentimental or intrinsic value because he had little or no market value and was irreplaceable.

Represented by Randall Turner of Bailey & Galyen, they argued that the Texas Supreme Court has repeatedly held that where personal property like a family photograph has little or no market value, damages can be awarded based on intrinsic or sentimental value. Therefore, the Medlens argued, they should be able to recover the intrinsic value of their dog.

Opposing counsel R. Paul Boudloche of Mason & Boudloche argued intrinsic value only applies to heirlooms or property that takes a long time to replace, like a tree. "According to Strickland's position, intrinsic damages could be awarded for a sentimental photograph of a family and its dog, but not for the dog itself," the judges wrote. "We find little reason in this argument and do not believe that it reflects the attachment owners have to their beloved family pets."

In remanding the case, the panel concluded, "Because of the special position pets hold in their family, we see no reason why existing law should not be interpreted to allow recovery in the loss of a pet at least to the same extent as any other personal property."

A huge shout-out to friend and colleague Adam Karp, who just helped his client recover $25,000 against her ex-husband for killing her cat.  Notably, the award was broken down as: $15,000 for the intrinsic value of the cat and $10,000 for the woman's emotional suffering.

Read more in The Olympian...

Congratulations, Adam!
Posted by A at 10:59 PM No comments:

I only wish I were back in Chicago so I could sue CPD again...

...story in the Chicago Tribune (including a WGN video clip of an interview with the victim dog's family)
Posted by A at 11:25 AM 2 comments:

Another attempt to mend his ways?...

Philadelphia Eagles quarterback Michael Vick has made another effort to say animal cruelty is wrong, urging Alabama lawmakers to increase penalties for cockfighting.
Read more at Fox News...
Posted by A at 4:51 PM No comments:

A shout-out to colleague Bryan Pease, who recently filed suit on behalf of the Animal Protection and Rescue League against Hot's Kitchen and its executive chef in Hermosa Beach. Read more about the restaurant's advertising for its foie gras burger that gave rise to the complaint in this Courthouse News Service bulletin...

Though there was a will, Fifth Third found a way to save Boots

Boots, an 11-year-old cat from Berwyn, has narrowly avoided using up the last of her nine lives, thanks to trust officers at Fifth Third Bank who resisted carrying out a death sentence stipulated in the will of the cat's owner.

Read more in the Chicago Tribune...
Posted by A at 9:59 AM No comments:

A big shout-out to colleague Adam Karp and the Washington State organization "Saving Pets One at a Time" (SPOT) for a significant - and really creative - rescue victory for 37 dogs!

Congratulations!
Posted by A at 11:58 AM No comments:

And S-l-i-g-h-t-l-y off-topic, but still worth posting:

Scott's coated its seed in an insecticide known to be toxic to fish and birds and that is not approved for use in bird food. The company has proposed paying a fine of at least $4 million. More from the Mother Nature Network... Ok, this is slightly off-topic, but it's my blog so I guess that's ok... plus, I think it would appeal to most, if not all, of this blog's subscribers.

Just found out about an essay contest Jasmin Singer and Mariann Sullivan are running on "Our Hen House" (which if you are not familiar with, it's very good and you ought to go give it a look-see anyway...). The point of the contest is to provide a platform to counter a recent NYT essay contest on why it's ethical to eat meat. Find out more at: Calling All Herbivores: Tell Us Why It's Unethical to Eat Meat: A Contest. Winner gets a tote bag (well, and the satisfaction of winning, of course) - good luck!
Posted by A at 3:27 PM No comments:

A great day for animals! (Not to mention animal law attorneys!)

A huge WOW! goes out to attorney Rebekah Lusk who won a six hundred and twenty THOUSAND dollar jury award in Maryland yesterday for the shooting death of Roger and Sandi Jenkins' lab, Brandi, by a sheriff's deputy. Read more here in the Frederick News Post...

Nobody Minds Dyeing the Egg, but the Chicken Is Another Story 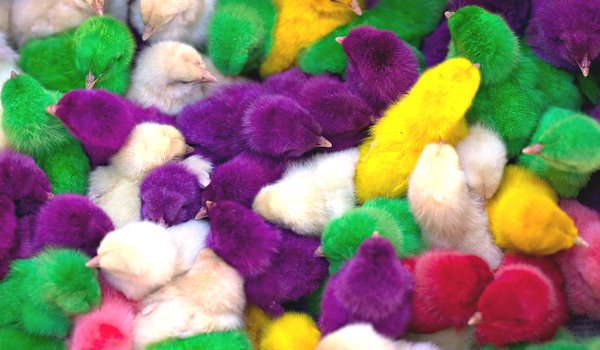 Good editorial in the NY Times today, but it is remarkable that society is not past this yet...
Posted by A at 9:52 PM No comments: