A couple of legislative items catching my eye this morning...

Members of the legislature in Ontario, Canada are pushing to end the ban on pit bulls. Read more in the Toronto Star...

And back stateside, legislators in Maryland pass a gay marriage bill. (Again, not directly related to animal law, but you know I view this as a good sign...) Read more in this L.A. Times article...
Posted by A at 8:31 AM No comments:

Animal law may get some help from animal science...

At a recent meeting of the American Association for the Advancement of Science, researchers agreed that dolphin and whale brains actually have a complexity that rivals human brains, and that they also possess a sense of self. As such, the deliberate killing of these individuals is as ethically wrong as killing a human. You can read more about the conference in animal cognition expert Marc Bekoff's commentary in Psychology Today.

On a somewhat related note, the AVMA says that the human-animal bond will be emphasized at its 2013 convention. You can read more about that conference in JAVMA News. (Speaking from personal experience, no matter what vets say at their conferences, I'll wait for the AVMA to put its money where its mouth is... and stop defending (and trivializing) all vet mal suits on the grounds that animals have no market value and therefore - even if the vet did something wrong - they don't owe much or anything to the family of harmed animal.)
Posted by A at 10:47 AM No comments:

From Ledy VanKavage: The Ohio governor signed HB 14, eradicating breed discrimination in the Buckeye state! The story is so new I don't see anything written on it yet...
Posted by A at 9:53 AM No comments: An animal rights group's inventive plan to use a remote-controlled spycraft to record the actions of hunters was thwarted when the hunters turned their guns on the mini plane.
Read more in the U.K. Daily Mail...
Posted by A at 11:46 PM No comments:

OMG: McDonald’s Does the Right Thing

There are more than a few improvements McDonald’s could make to better the treatment of its customers and workers, of the animals that provide the meat it sells and of the environment. On Monday, after years of internal and external pressure, the company announced a laudable course of action regarding the sows (female pigs) in their supply chain: McDonald’s is requiring, by May, that its suppliers of pork provide plans for phasing out gestation crates. Once those plans are delivered, says Bob Langert, the company’s vice president of sustainability, McDonald’s will create a timetable to end the use of gestation crates in its supply chain. “Considering that 90 percent [of the pregnant sows] in the United States are in gestation stalls, this is a huge issue,” he says, and he’s right.

Read the rest of Mark Bittman's editorial in the New York Times...
Posted by A at 7:30 AM No comments:

Pet advocates are fighting like cats and dogs to stop a deficit-slashing proposal from Gov. Jerry Brown that aims to save $23 million by ending reimbursements to animal shelters for the cost of keeping strays alive.

zookeeper Jack Hanna criticized Ohio lawmakers Thursday for not yet passing a bill to regulate exotic animals, months after authorities shot dozens of lions, tigers, bears and other wild creatures let loose by their suicidal owner.

Send us your best photo of a heartfelt moment between a person and their animal companion - we'll post the entries on our photo wall and then on Monday our viewers will vote on a winner!

*The winning picture will be featured in our Tuesday, February 14th post - and DISPLAYED IN THE PERMANENT COLLECTION OF OUR "HUMAN-ANIMAL BOND" EXHIBIT!* (Once the museum opens, of course.)

Please send all photos to: support@animalhistorymuseum.org.

Fine print: by sending a photo, you agree that the Animal History Museum may use and display it. We will not sell, exchange or otherwise give your photo to any other person or entity. One entry per person please. Contest closes Sunday, February 12, 2012 at 8:00pm. Any obscene or inappropriate photos will be deleted. We reserve the right to add extra rules if we forgot anything... 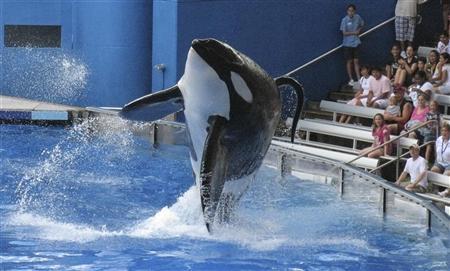 A federal judge on Wednesday threw out an animal rights group's lawsuit accusing SeaWorld of enslaving captive killer whales, ruling that orcas had no standing to seek the same constitutional rights as people.

People for the Ethical Treatment of Animals, or PETA, had accused the chain of aquatic theme parks of violating the rights of whales under the 13th Amendment of the U.S. Constitution, which abolished slavery in the United States.

Here's the rest of the Reuters article... A bill eliminating a 25-year-old Ohio law automatically declaring the "pit bull" to be an inherently vicious dog was overwhelmingly approved by the state House Wednesday and is headed for Gov. John Kasich's signature.

Read more in the Toledo Blade...

(And congrats to my friend and lobbyist extraordinaire, Ledy VanKavage, and everyone else who has worked relentlessly to see this ban overturned!)
Posted by A at 7:38 AM No comments:

One small step for the gay/lesbian community... maybe not quite a giant leap yet for mankind (but definitely a move in the direction of advancing a compassionate society)... and if you ask me, this is still also a good harbinger for animal issues...

Students at Drury University in Springfield, Mo. now have the opportunity to earn a minor in Animal Studies thanks to donations from Drury alumnus and former Price is Right host Bob Barker. According to Dr. Patricia McEachern (Mc-Karen), the Dorothy Jo Barker Endowed Professor of Animal Rights, several students have already begun pursuing the minor.

Read more in this Business Wire press release...
Posted by A at 7:26 AM No comments:

Ohio was one of the few - in fact, I think maybe the only remaining - state to entirely ban pit bulls by breed. (If you've never heard of "canine profiling", think "racial profiling" and it becomes easy to see why this is just flat-out wrong.)

Thankfully, it looks like that is about to change. A measure is expected to be on its way to the Governor's desk soon that would outlaw breed discrimination in the state. A huge shout-out to Ledy VanKavage and everyone else who has worked so tirelessly to get this done!