Not happy about this one at all. Read more in an LA Times blog here...
Posted by A at 11:11 PM No comments:

Animal Rights: What Legislation Is Reasonable?

Nice little public radio interview takes a look at the question. Guests include Joyce Tischler and Gene Bauer. Check it out on KUOW, Puget Sound Public Radio.
Posted by A at 8:17 PM 2 comments: 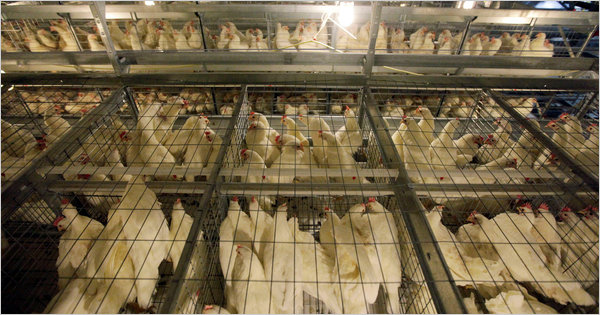 Two groups that are usually squawking at each other — egg farmers and animal welfare advocates — announced an unusual agreement on Thursday to work together to seek a federal law that would require larger cages and other improved conditions for the nation’s 280 million laying hens.

Details in The New York Times...

Marion County became the most recent municipality in the Sunshine State to tone down its draconian dangerous dog ordinance. Thanks go to Fred Kray - and all of the other animal law attorneys around the state - for all of the tireless efforts in bringing these cases for years now. Read more in the Ocala Star-Banner...

A new law takes effect in Illinois today, requiring a bittering agent to be added to antifreeze. This will (hopefully) make it less attractive to anyone sniffing around the garage floor just to see what's going on. You can read (a little bit) more in the Illinois Statehouse News.

(And yes, the bigger deal is that Illinois finally put the death penalty to rest. Although (as the writer correctly observed just based on my own personal observations from living in Chicago for a dozen years), most state residents don't even realize Illinois still had a death penalty law on the books since the moratorium had been going on for so long.

The new so-called "Amazon tax" (nothing to do with animal law but it happens to be in the ISN story) is going to be interesting to watch. I imagine it will eventually catch on in all states.)
Posted by A at 10:51 AM No comments: