A special prosecutor has declined to bring charges against nine UW-Madison researchers and officials responsible for experiments in which sheep died of decompression sickness.

It's the little things...

As United and Continental grapple with how to merge these two airline giants, it's nice to hear that they are considering animal welfare in the mix. A recent Wall Street Journal article mentioned - albeit briefly - that airline officials had to decide whether to adopt Continental's policy of sending animals up the conveyor belt facing the cargo hold, or United's policy of sending the animals facing the cargo workers. Apparently, they wondered whether it would be scary for the animals to see the hold, so United's policy won.

Ok, I admit, this isn't much. But it is something. Airlines are not going to give up the extra revenue from allowing pets on board so long as travelers request the service, and there's no sign that travelers are cutting back on requests to take their companions "with" them on a flight by sticking them in a cargo hold. So in the meantime, at least maybe the changes in federal law a few years back are really starting to take root in airline culture (even if the horror stories that prompted the changes hasn't had the same effect on customers).
Posted by A at 9:29 AM No comments:

... getting some mention in various news blurbs this morning.

guidelines have been issued by the St. Louis City Commissioner of Health which they say will put a stop to the abusive practice of using truck, tractor or hardware chains to restrain animals. Read more at CBS St. Louis...

A look at why animal welfare laws - from puppy mill regulation to the new anti-neglect bill, Chamberlin's Law - are always a tough sell at the NC General Assembly, year in and year out. WRAL reporter Laura Leslie reports...

And in New York:

e state assemblyman has introduced The Companion Animal Access and Rescue Act (CAARA) to create protections for homeless pets and end the so-called "convenience" killings (euthanizing animals when there are empty cages). It will also make it illegal to kill animals if rescue groups are willing to save them. Find out more at the Examiner.com...
Posted by A at 10:48 AM No comments:

Civil union law about to go into effect in Illinois

Nice little weekend feature on one couple as Illinois joins the growing ranks of states to recognize basic, fundamental rights for gay couples.

Read more in The News-Gazette...

The City of West Hollywood voted unanimously this week to draft an ordinance banning the sale of fur apparel within city limits. WeHo, as it is affectionately known by locals, has been leading the nation for more than 20 years now in redefining itself as a cruelty-free zone. Read more in the WeHo News and Enhanced Online News.
Posted by A at 10:11 PM No comments: 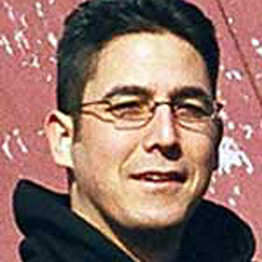 The FBI's infamous "ten most wanted terrorists" list is down to nine with the recent death of the 911 mastermind (apparently there's no number 11 waiting in the wings). Who are those nine, you might ask? Eight al Qaeda operatives and one animal rights extremist. And according to the research scientist who penned this opinion piece in today's Wall Street Journal, it is perplexing why the public does not regard that individual, Daniel San Diego (at left) as more of a threat.

(Spoiler alert: this is not an animal-friendly piece. Aside from the fact that it's not a bad thing to keep tabs on what the opposition is saying, I was also just bemused that the FBI considers an animal rights extremist dangerous enough to edge out the countless other al quaeda minions who would no doubt clamor for a place on that list.)

Lawmakers on Long Island, New York, passed a bill earlier this week that "bars pet stores, breeders and animal shelters from selling or giving animals to people listed on the county’s new animal abuse registry." Read more in the Wall Street Journal or Long Island Press.
Posted by A at 10:45 PM No comments:

Cute little BBC piece on how one rancher is keeping the coyotes at bay...

Back to the trenches...

where news crews first reported on efforts to save people and then - as public interest started to wane when the disaster began to fade in the collective memories of all but those who were directly affected - on efforts to save animals...

news reports are starting to crop up on the efforts to save animals in the wake of the tornadoes that ripped through the South recently. Here's one look from NPR.

Wanna have sex with your dog? Not in Florida...

but the Florida legislature finally passed a measure banning bestiality in the Sunshine State. (Too easy; I'm gonna let that one go...) The measure now goes to Governor Rick Scott. I haven't read anything suggesting he's opposed to the bill - let's hope not - so hopefully we'll see him sign it into law soon. Read (a little) more in this Miami Herald blurb.