Hooray for the Dutch!

As the UK's Financial Times reports, the watershed passage of this unprecedented legislation will make halal and kosher methods of slaughter - which do not use anesthesia - illegal. It has also inadvertently done what several thousand years of foreign diplomacy has never been able to achieve: unite Jews and Muslims on at least one issue.
Posted by A at 9:40 PM No comments:

The needless dichotomy between religious freedom and animal cruelty

The Netherlands is set to take an historic vote tomorrow (ok, well, it is almost time to get up there already...) on whether to ban halal and kosher slaughter. The legislation... which has pitted two small minorities against an even smaller animal rights party... is being watched worldwide. You can read more in The New York Times or the care2.com blog

The issue basically comes down to this: Jews and Muslims both believe that their methods of slaughter which - and yes, this is something of a oversimplification - basically involve a quick, deep slash of a conscious animal's throat are humane. More importantly, they are required by religious principles. Animal rights activists believe that the scientific evidence which - again, an oversimplification - shows that an animal needs to be stunned first in order to make the slaughter as humane as possible should be the guiding principle. And make no mistake, this is a passionate debate all around.

Moreover, the debate is not just between religious and animal advocates, but within the AR-AW community itself. I remember a number of years back suggesting to a colleague that, as Jews, we might be in a better position than others to try to persuade yet other Jews to endorse an effort to overturn the exemption for Kosher slaughter in the U.S., since no one could accuse us of being anti-Semitic. To my surprise, my normally very pro-animal colleague suddenly became very agitated and said kosher slaughter wasn't a problem. It quickly became very clear that I was not going to change my colleague's opinion any more than my colleague was going to change mine; we let the issue drop.

Don't get me wrong; I believe strongly that religious freedom is one of our country's most important values (and by extension, an important value for the Dutch as well). I have friends of all different religious backgrounds... I have hired staff of all different religious backgrounds... I have even gone so far as to not only encourage my gentile boyfriend to go to the church of his choice... but to accompany him on a pretty regular basis. This is despite the fact that the church of his choice is no less than an hour and a half (yes, you read that right) from our home. One way. In other words, Sunday morning church literally takes all of Sunday morning.

But I draw the line when someone says that their religious beliefs require someone else to suffer - and especially when those sufferers are even less able to defend their own interests. I don't think that is really what Islam or Judaism is about, and I encourage anyone who bristles at what I'm suggesting to really think about whether they think that's what these two belief systems are about. These two ancient traditions each claim to be based on the idea of a compassionate G-d. They have both adapted to other changing social mores without being destroyed. Why should this be any different? In other words, if it is possible to interpret a passage demanding "an eye for an eye" in a way that no longer requires blinding a wrongdoer, then surely it is possible to interpret passages demanding ritual slaughter in a way that acknowledges improvements in a process that were not available some 1,300... or 5,771... years ago.

Just as the right to free speech does not include the proverbial right to yell "fire" in a crowded theatre, there is no reason that the rubric of religious freedom should give safe harbor to a practice that would, under any other lens, be viewed as cruel.
Posted by A at 9:45 PM No comments:

San Francisco’s pet cause is for the dogs

Why is a municipal commission trying to ban sales of dogs, cats and goldfish?

The city of San Francisco takes its name from St. Francis of Assisi, the patron saint of animals. Francis has been an effective advocate lately, because the municipal Commission of Animal Control and Welfare has proposed a new law to ban almost all pet sales within city limits.

Apologies for the break in posting... personal events again having overtaken blogging time... hopefully will have more time in the weeks to come...

Meantime, some terrific legislation just passed in NY for same-sex couples. (Gay rights being an area that seems to be a harbinger for the acceptance of animal rights.) So please see below!
Posted by A at 8:06 AM No comments:

The Road to Gay Marriage in New York 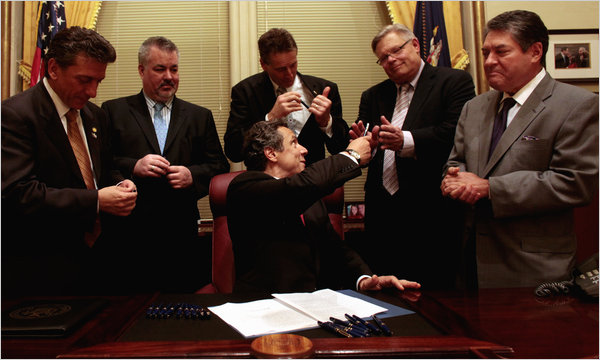 The story of how same-sex marriage became legal in New York is about shifting public sentiment and individual lawmakers moved by emotional appeals from gay couples who wish to be wed.

But, behind the scenes, it was really about a Republican Party reckoning with a profoundly changing power dynamic, where Wall Street donors and gay-rights advocates demonstrated more might and muscle than a Roman Catholic hierarchy and an ineffective opposition.

And it was about a Democratic governor, himself a Catholic, who used the force of his personality and relentlessly strategic mind to persuade conflicted lawmakers to take a historic leap.

Read more about this historic leap in The New York Times...

An actual bipartisan effort in the Senate this week... as two senators join forces to introduce the "Against Horse Slaughter Prevention Act of 2011."

The measure is intended to try to finally end the slaughter of American horses not just in the U.S. (where technically it has been banned for several years now), but to stop the export of horses for slaughter to Mexico, where it remains a disturbingly common and often cruel process.

Read more in the Examiner.com and Harnesslink.com...

Wisconsin: A new law for dog sellers, rescuers and shelters will take effect in Wisconsin on Wednesday.The law, called Act 90, will require breeders who sell 25 or more dogs a year from more than three litters to apply for a license and be subject to inspection from the state's Department of Agriculture. WISN-TV reports...

Ohio: Cleveland City Council voted to amend part of the City's vicious dog ordinance (Ord. 712-11) during its Monday night meeting. Major changes to the law include two classifications for threat dogs: Level I – Dangerous & Level II – Vicious. Emphasis on the classification is based upon evidence of behavior of the dog, not the breed. The pit bull breed will no longer be considered vicious. 19 Action News has that story...

Missouri: A stinging rebuke of the referendum process last week, as Governor Jay Nixon (a Democrat, no less... for shame!) caved to political pressure. He signed a measure repealing the Puppy Mill Prevention Cruelty Act that voters had approved in the last election and replacing it with some rather lame, watered-down provisions that the breeding industry feels it can live with. Read more in Kentucky's Lexington Herald...

Ok, sorry it took me a couple of days, but this is just too priceless not to post. Here's the video clip of Sarah Palin's revisionist recounting of Paul Revere's apparently-not-as-famous-as-the-rest-of-us-were-taught ride.

I used be a newswriter at CNN Atlanta many, many moons ago. Had a really good friend and colleague Ken, (may he rest in peace), who used to always say "never let the facts get in the way of a good story." Now, of course, Ken would say that with a wink and smile.

is sticking with her story. She apologized this afternoon if she "stepped on" any of Mitt Romney's publicity the other day as the Palin mobile rolled into a nearby New Hampshire town (he was only announcing his candidacy - what a coincidence!), but she is adamant that she knows her U.S. history... even if none of the history books seem to know it the same way...
Posted by A at 9:12 PM No comments:

Here's a tax court case - not nearly as sexy as punitives - but the court did allow a woman to claim a bunch of unreimbursed expenses for volunteering with a feral cat colony as charitable contributions. A shout-out to my beau, Greg (a tax attorney), for pointing it out. Thanks, Greg!

An appellate court handed down a great ruling yesterday in the case of wrongful injury to a "pet animal"... holding that the owner can recover not only the costs of care, but also punitive damages if the injury is found to be intentional. Here's the link to: Kimes v. Grosser, et al.