LOS ANGELES - A federal judge in Los Angeles today rejected an emergency bid to freeze California's recently enacted ban on the sale of foie gras, the delicacy prepared from the force-feeding of ducks and geese.

Read the rest of the Daily News article here...


Thanks to Stephen Wells at ALDF for the heads-up!
Posted by A at 7:57 AM No comments:

Legal battle over Lennox ends with his death... or does it? 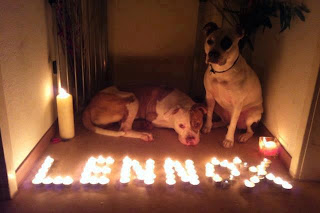 Very sad and disheartening news out of Belfast, Northern Ireland yesterday.  A two-year court battle over a dog that "resembled" a pit bull ended with word that the local government forged ahead and put the dog down - despite offers to re-settle the dog, named Lennox, as far away as the U.S..


You can read more about this story in the Huffington Post... not to mention scores of other articles and commentaries popping up all over the internet and blogosphere.

Too bad Lennox had no idea how many people cared about him.  He spent the last two years of his life in a cramped cage at a pound.  The photos circulating on that are just too depressing to share, although my guess is that anyone who is reading this blog knows exactly what those pictures look like without having to actually see them.  Irish authorities claimed that the dog was too unpredictable and dangerous to be placed in any society.  Advocates would argue that anyone stuffed into a cage for two years would be in a pretty unpredictable and sour mood - but those empathetic arguments fell on deaf ears.  Officials even refused to let Lennox's owner be present at the euthanasia - telling her instead that they would mail her the ashes.

Mail her the ashes?  Seriously?  Why stop there?  Maybe burn down a homeless shelter or blind a few orphans on the way to the post office.  The human capacity for cruelty really amazes me sometimes.

So what's the take-away here?  My entire professional career has been focused on trying to avoid all of the moral, touchy-feely approaches (even tho my heart is screaming "how would YOU like to be stuffed into a cage?!" as much as the next person) because I know they never work on the sorts of people that controlled Lennox's fate.  Sadly, none of the well-reasoned legal arguments or practical alternatives didn't either.  Now there are calls to boycott tourism in Northern Ireland.  Can't hurt to try, but it seems like a longshot to affect future cases and certainly does nothing for Lennox or his family now.

So what's left?  What works?   I don't know.  I doubt anyone knows (or, to borrow from a Keith Urban song, we'd all be doing it right now).  Whenever I use this blog space to vent I try to end on at least something of an uplifting note, but there just really isn't one here.   We have to keep asking ourselves the question  "what will work?" and pushing for an answer - for all of the Lennoxes out there - not to mention for all of us whose hearts and minds are forever scarred with the memory of every failure.
Posted by A at 11:08 AM 2 comments: